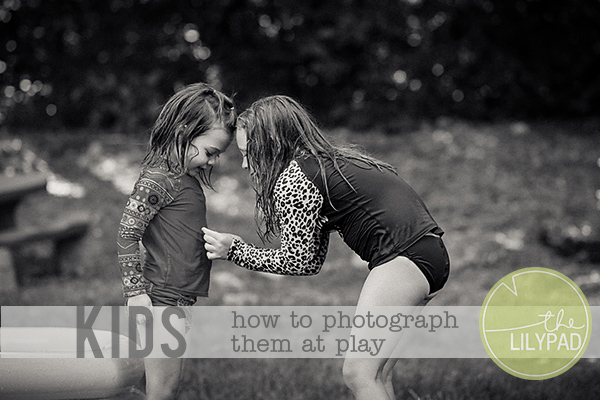 Polly Liana here with some tips about how to best capture great images of children while they’re playing.  Whether it’s summer or winter where you are, there are lots of opportunities to take photos of kids in their most natural environment: at play.  It’s the environment that, for most kids, provides the most natural joy and the best chance to capture that joy.  As a kindergarten teacher for 24 years, I know that if you want to get really genuine, lovely shots of a child’s real spirit, stop telling them to pose and let them play. 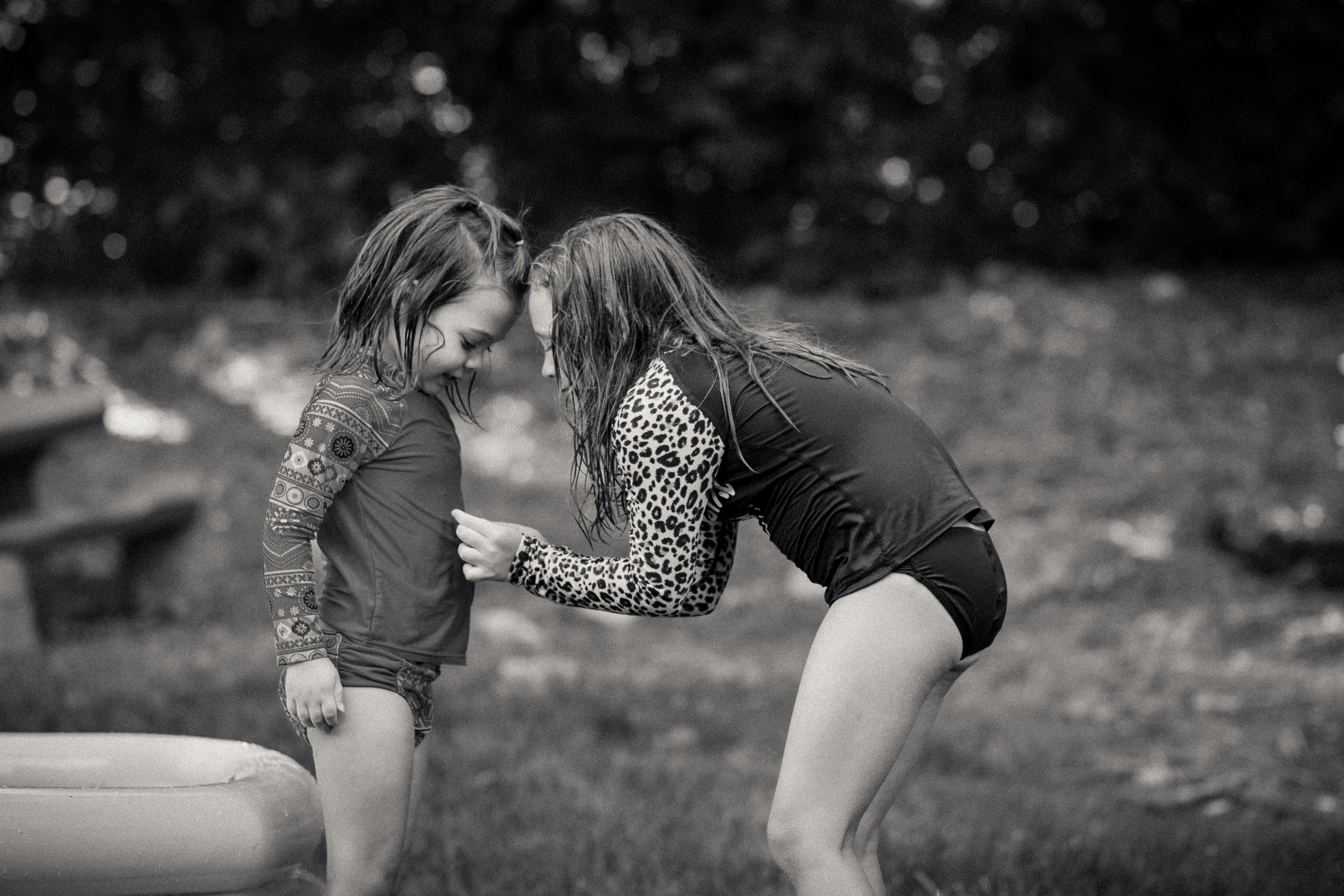 The black and white image above is one of my favorites of my two girls.  The younger one (Phoebe) was standing in front of a full baby pool and the older one (Morgan) took a running start like she was going to push her little sister in.  Suddenly, Morgan stopped short and did a very tiny little push on her tummy which made Phoebe giggle.  The photo captures perfectly the dynamic between the two of them.  Morgan is the compassionate leader and Phoebe is the hilarious follower.  You can see it on their faces and in their body language.  Photos are so good for capturing all of it.

Today I will show you a few tips using photos I took recently at a small children’s museum not far from our home.  Not one of these photos is of a child posing in the traditional sense (“smile!”).  My goal was to capture the details and joy in their play while they’re still young enough to play with this kind of passion.  As we know, this phase goes by in a flash so we have to catch it before it’s gone.

To me, this is the difference between good and great when it comes to photos of children.  We are almost always taller than our children, so many times the perspective comes from a higher plane than the child.  See the example below, taken when I was standing over Phoebe: 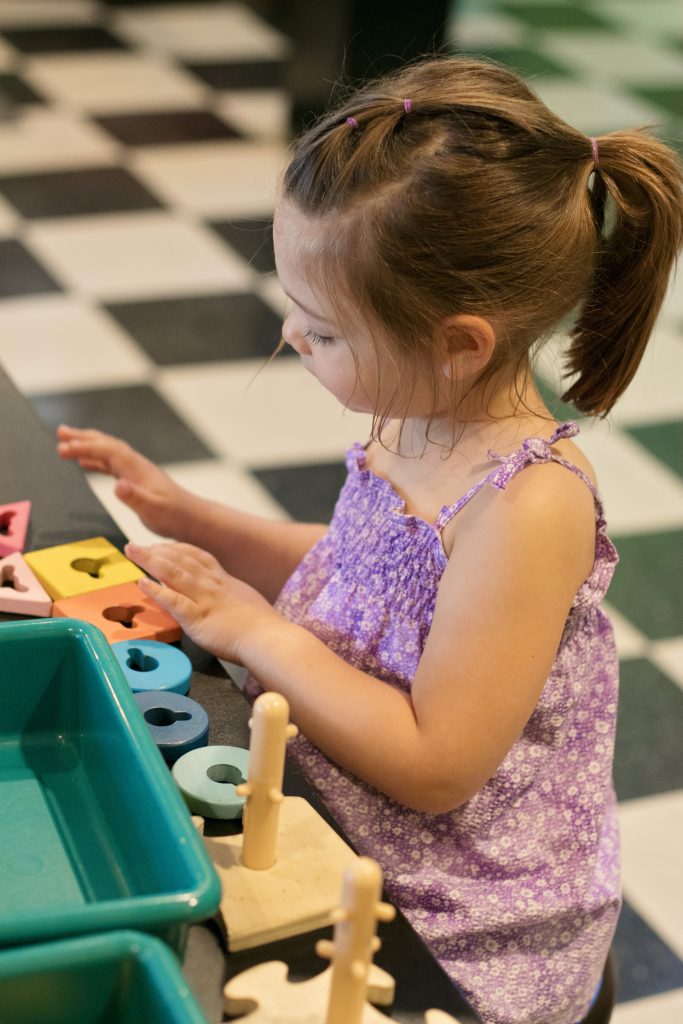 And one when I was at her level: 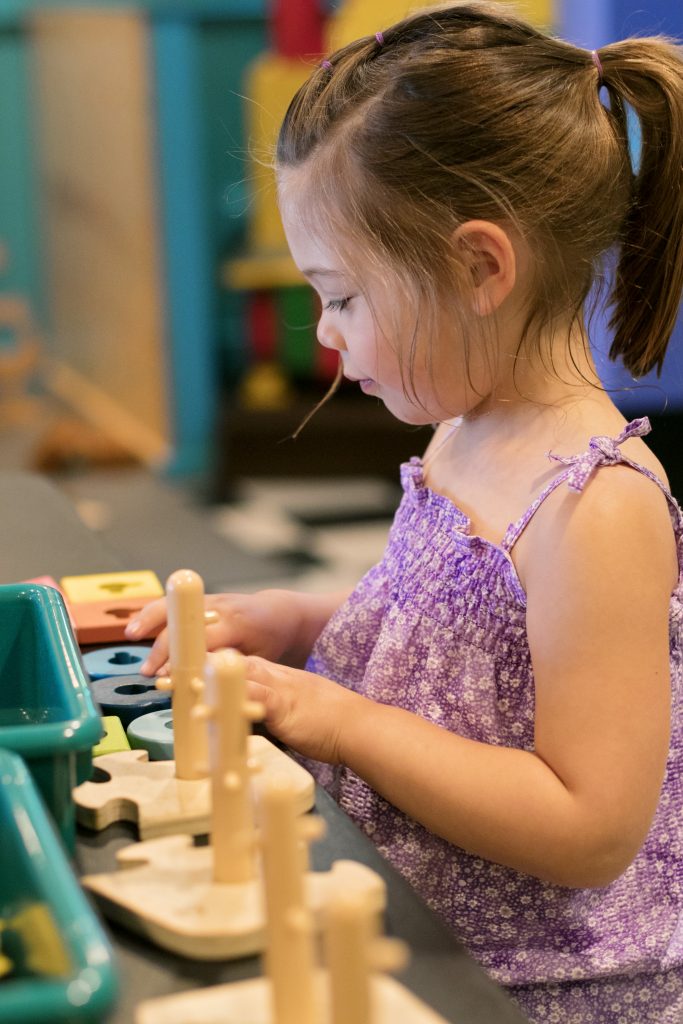 See the difference?  Getting down low really gives you a more intimate perspective and captures expressions in a more effective way. 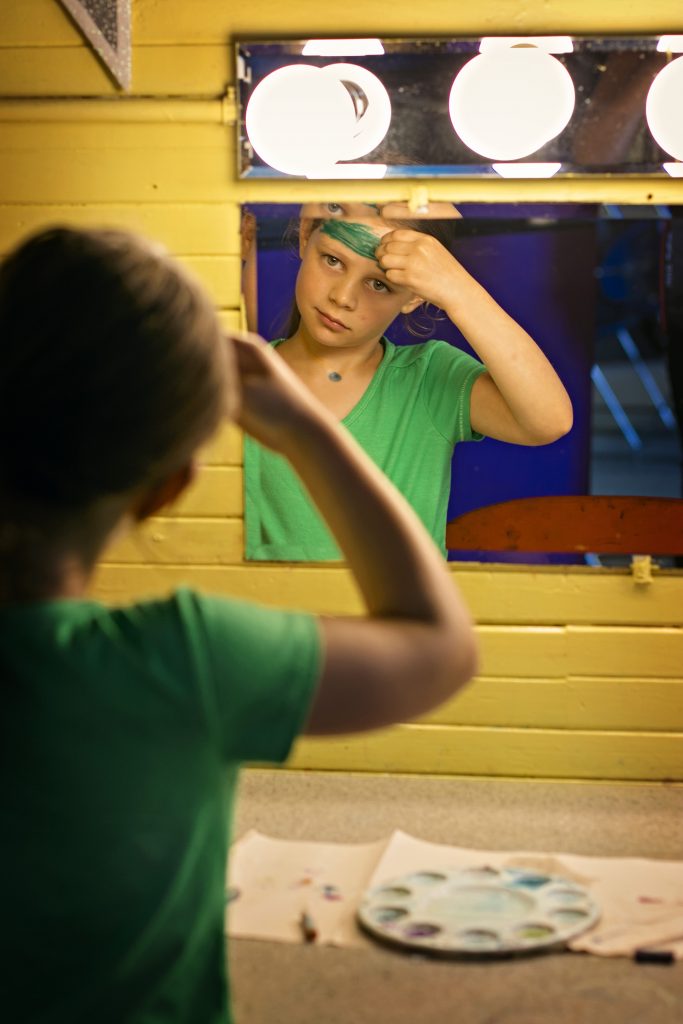 Morgan was in front of the mirror, painting her entire face to look like the Grinch.  She was so intent and I had this flash forward of her as a woman, putting on her makeup.  I wanted to get the feeling of the whole scene, so I pulled out a bit and got the back of her body and arm in the shot, too.  Including her body in the foreground really helps the viewer understand that she’s looking in a mirror.

Tip #3: Keep your camera on “multi burst” mode if you have it

We all know kids move fast.  The perfect shot is gone before you know it so your camera has to move fast too.  Here is a series of shots I took when Morgan snuck up behind Phoebe to surprise her with her green painted Grinch face.  I knew Phoebe’s reaction would be great, so I kept my camera focused on her and took several shots in a row as she turned around.  That’s how I got this progression: 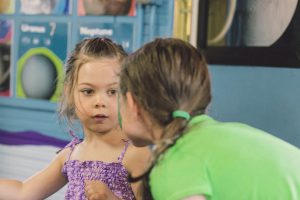 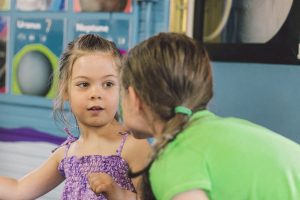 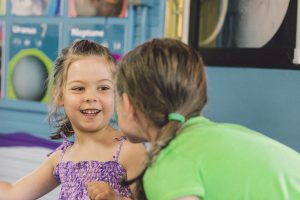 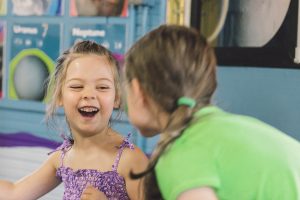 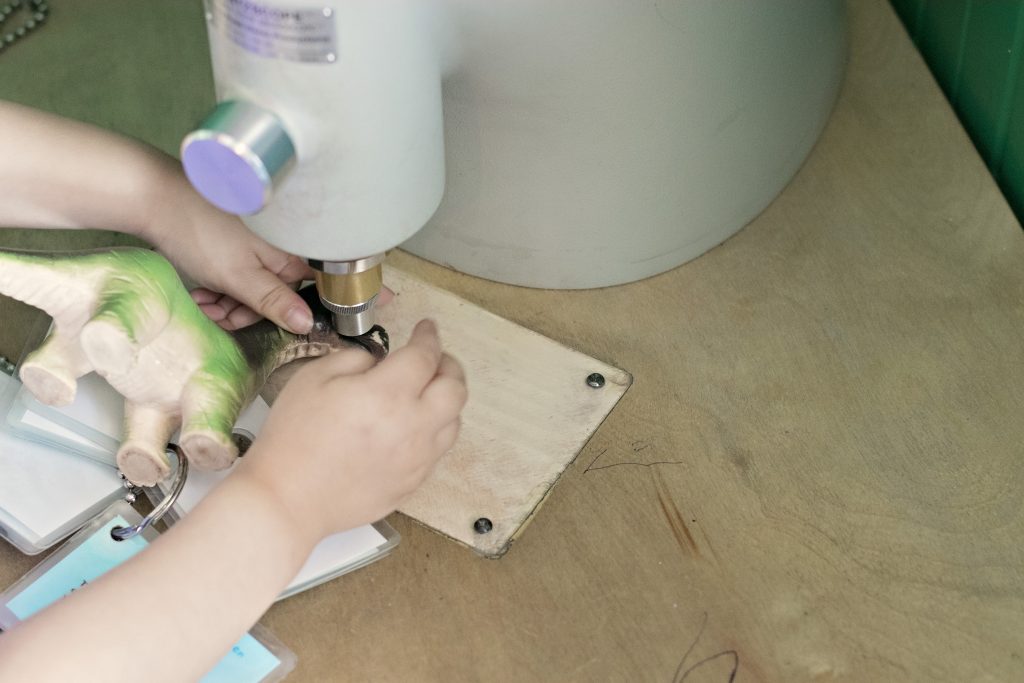 Phoebe watched Morgan as she used a big microscope to look at some slides.  After Morgan walked away, Phoebe jammed this giant dinosaur model under the microscope lens.  This image represents a four-year-old’s attempt to be a serious scientist like her big sister, while still showing that she’s got a lot to learn about how science tools work.  I wanted to focus on her actions rather than her so I kept the perspective zoomed in tight.  Her body didn’t need to be included in this one– just her sweet chubby hands and that poor dinosaur shoved under a microscope. 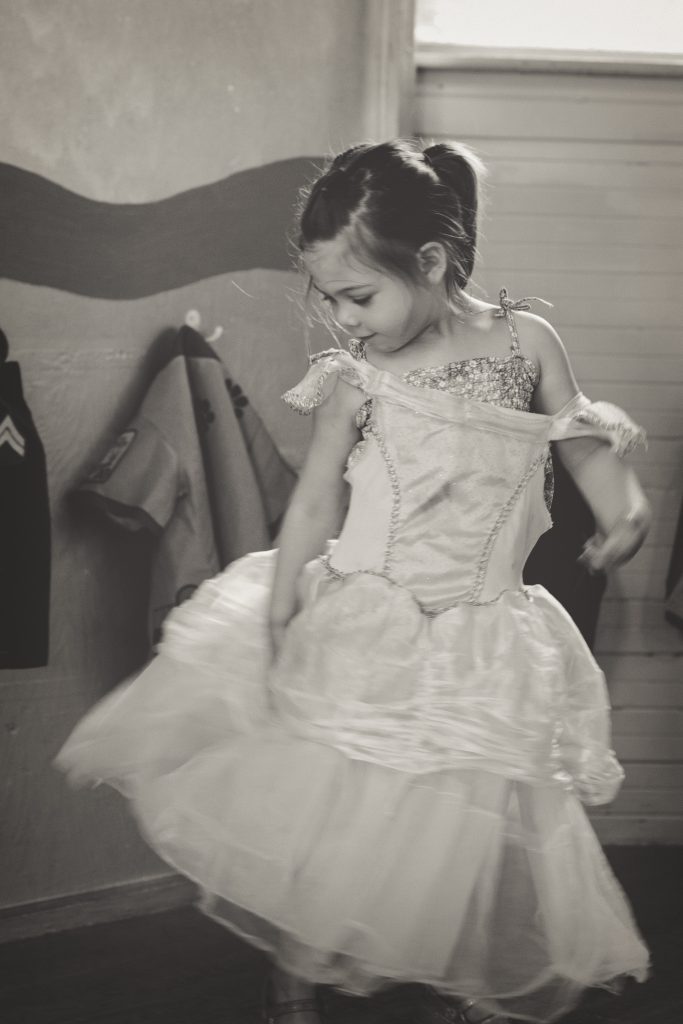 In general, photographers want to get crisp, sharp images.  But to show motion, it can be very effective to show blur.  Phoebe was doing lots of twirls in this fancy dress and I wanted to show that.  I deliberately kept my lens open a tiny bit longer to capture some of her motion blur.  Also, a note about black and white: This images just “wanted” to be B&W.  Some just do.  The colors were distracting and her lovely expression was the focal point for me so I took away most of the colors to let the expression shine through. 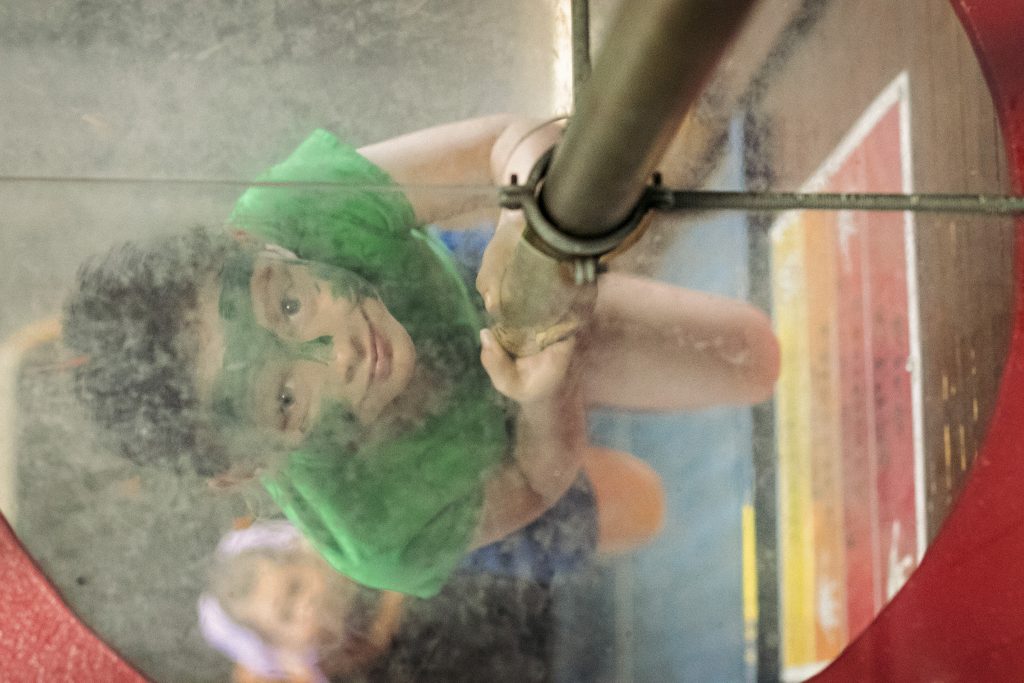 The museum is in this really cool old fire house that was renovated.  They kept the original fire pole and put a plexiglas sheet across so kids can climb all the way up without the kids upstairs falling down the pole.  Morgan has gotten really good at climbing it and I wanted to show it.  I could have taken a photo of her from downstairs but I thought I’d use that clear plexiglas to my advantage.  The image is cloudy but you can see Phoebe way down below and the proud sense of accomplishment on Morgan’s face.  I know tip one was about getting on their level but some opportunities ask us to bend that rule.

I hope you’ve been inspired to take some photos of children at play sometime soon.  It’s really one of the loveliest things you can watch and capture.  Have a great week and happy scrapping!